You are at:Home»Tech»Enterprise»Car-Sharing Companies to Start Introducing Tesla’s Model S in South Korea

Car-sharing companies are planning to start introducing Tesla’s Model S in South Korea before it is officially released in South Korea.

SoCar recently introduced a teaser image of Model S on Facebook and hinted that it will be introducing Tesla’s Model S as one of its new cars. Although SoCar introduced silhouette of headlamps on Facebook, one can know that these are Tesla’s headlamps just by looking at how they are shaped.

Reason why SoCar is introducing Model S is because it wants to emphasize that car-sharing business is the most suitable service for electric vehicles. Car-sharing service is a service that allows people to rent cars every 10 minutes and is often used when people need cars for short period of time.

Car-sharing is a marketing opportunity for electric vehicle companies like Tesla. They can expand their bases as people who are aged between 20 and 30 experience electric vehicles. Due to this reason, car-sharing companies want to introduce Model S, which will be Tesla’s first model that will be released in South Korea, as soon as possible. 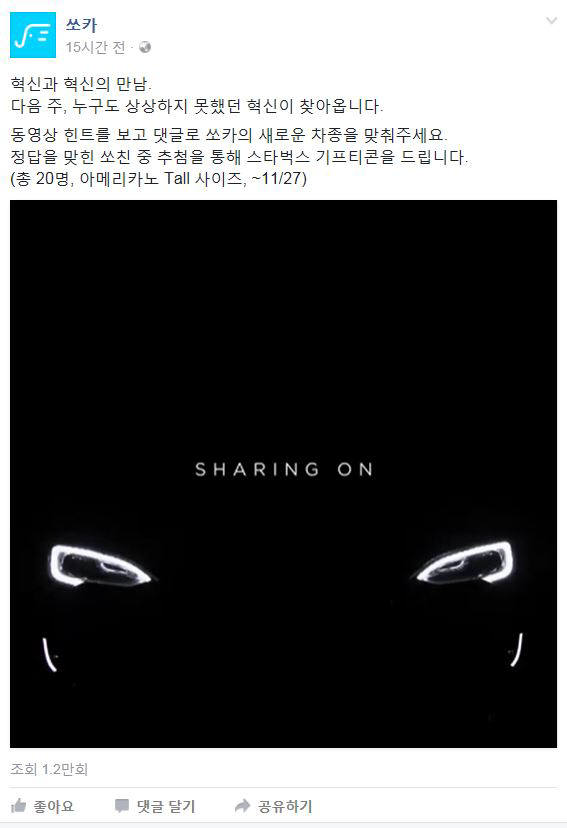 SoCar is currently discussing with Tesla Korea to introduce car-sharing service around the time when Tesla’s vehicles are officially released in South Korea. Other car-sharing company like Lotte Rental announced that Lotte Rental Car and Green Car are all discussing with Tesla Korea to launch their services along with official release of Model S in South Korea.

It is predicted that Model S will be officially released in South Korea during first half of 2017. Although it was supposed to be released by end of this year, schedule has been delayed when Tesla was having trouble in receiving approvals from Ministry of Land, Infrastructure and Transport (MOLIT)and Ministry of Environment (ME). It is heard that Tesla already reapplied to MOLIT for incompletion of documents during a registration process for foreign automotive manufacturers and is going through testing phase for ME’s certification regarding exhaust gas and Ministry of Trade, Industry and Energy’s certification regarding fuel efficiency.

“After releasing Model S and Model X during first half of 2017, then we are going to release Model 3 in South Korea.” said Vice-President Nicolas Villegerof Tesla who is in charge of Tesla in Asia-Pacific regions at a briefing session in South Korea.