You are at:Home»Tech»Enterprise»Mobile Banking Starts to Become Generalized in South Korea

KB Bank has secured the most users in mobile banking field that is seen as the index for future competitive edge in financial world.

KB Bank has also remained as the number 1 in number of overall members in first half of 2016. IBK Industrial Bank has secured the number 1 position in rate of increase and emerged as a dark horse.

According to a report of current situation of commercial banks’ Smart Banking that was obtained by The Electronic Times on the 5th, KB Bank had 7,631,194 mobile banking users by end of June of this year and has secured the number 1 position in bank industry.

KB Bank has also maintained its number 1 position in number of new mobile banking members between January and June of this year by having 822,307 new members. Followed by KB Bank, there were KEB Hana Bank that had 639,488 overall members in first half of this year and Woori Bank, which is actively working on mobile banking such as Wibee Bank and had 617,274 new members. Followed by these three banks, there were Shinhan Bank (606,637) and IBK Industrial Bank (499,024) that are having fierce competitions. 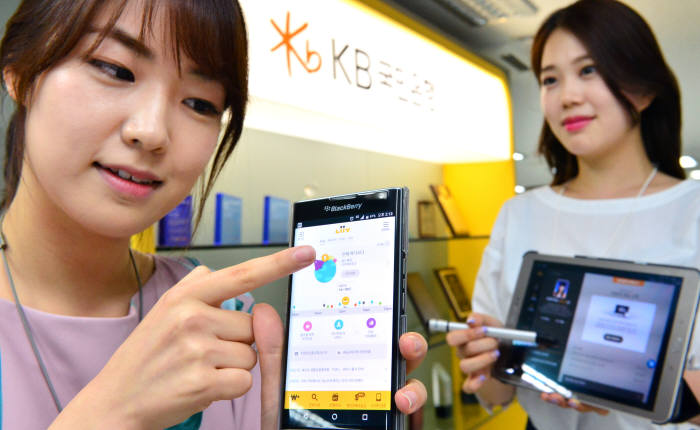 It is confirmed that KB Bank’s mobile banking is being used the most out of all commercial banks’ Smart Banking systems. An employee from KB Bank’s Smart Strategy Department is demonstrating mobile life financial platform called ‘Liiv’. Staff Reporter Yoon, Seonghyeok | [email protected]

As rate of use of mobile bank is increasing rapidly this year, online financial transactions are rapidly changing from PC-based internal banking o Smartphone-based mobile banking.

KEB Hana Bank has secured number 1 position in rate of increase of users in last year (29.5%) through a merger with Korea Exchange Bank. Followed by KEB Hana Bank, there were IBK Industrial Bank (27.3%) and Woori Bank (23.1%).

Woori Bank, which is strong in traditional channels, is threatening top banks by displaying potential in mobile banking sector. Woori Bank has launched itself as one of top financial platforms by launching innovative services such as Wibee Bank and Wibee Talk.

KEB Hana Bank, which does not have that many customers, is quickly securing mobile banking users by strengthening its retail marketing such as Hana Members. It is expecting visible increase in number of customers when marketing of converting Members’ customers to customers of Hana Bank becomes regularized.

Most of banks recorded close to two-digit rate of increase and proved that Smartphone-based non-face-to-face financial uses are heavily increasing. On the other hand, uses of traditional bank windows and telebanking decreased. It is confirmed that transactions done by bank windows have fallen below 10% of overall transactions.